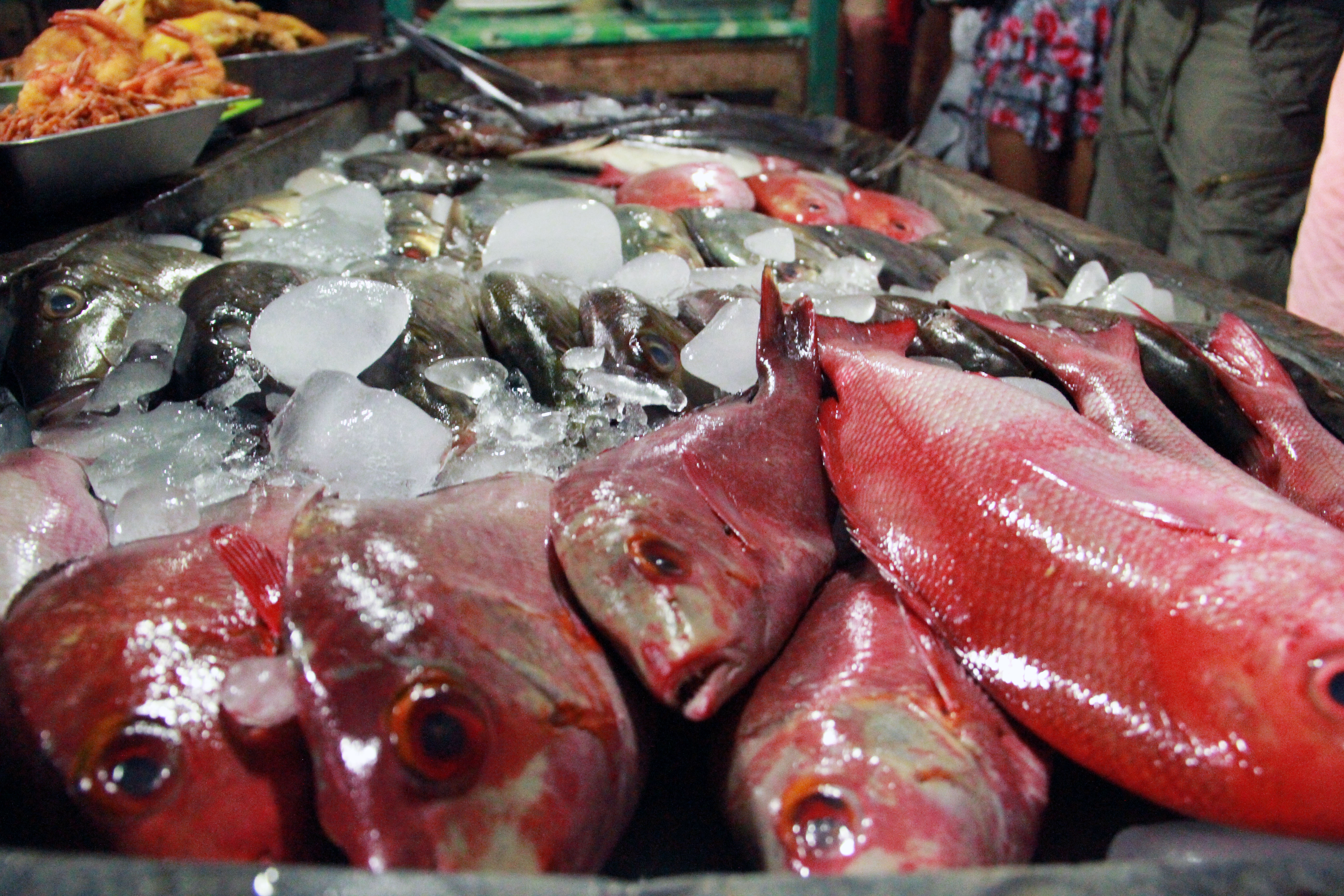 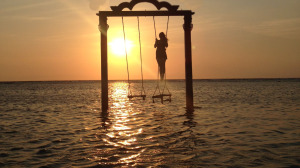 I’m back on the island of Bali, but I wanted to update with a quick post on my time on Gili Trawangan, one of Indonesia’s many tiny islands.

Known to most travelers as “Gili T.” (those dang Indonesian words can be hard to pronounce correctly), this island can be kind of a party place. While one of the other Gili Islands might have been more my pace, I decided on Gili T. so I could meet up with some backpacker friends that were already there. There is a fast boat from Padang Bai (I caught a shuttle there from Sanur), which is a small town on the Eastern coast of Bali, and it only takes an hour or so. The fast boats have about a 50-person capacity, and there were probably 75 on our boat, so they stowed Pip, Alberto and I on the roof of with a few other stragglers and the luggage. 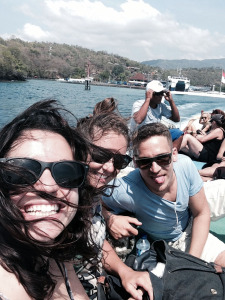 As the ride went on, about half the people on the boat realized that the roof, in fact, was the coolest place to be. Someone hooked their iPod up to the boat’s speakers, someone else was selling Bintangs, and off we went. Not too shabby. I didn’t even get sick! That was not unassisted, by the way. I had taken my weight in Dramamine.

Gili T. has a few things going on. Here’s what I managed to find on this trip:

Snorkeling. Was feeling a little ill, so I didn’t want to opt for a diving adventure, but I still wanted to be in the sea. There is pretty great snorkeling on Gili T – every different side of the island has something different to offer. We chose a point on the northern tip of the island that was close to our hostel, and went from there. The coral was pretty, but pretty severely damaged in some areas, most likely due to less-than-careful divers (stop touching stuff, guys!!). There were plenty of beautiful fish, my favorite being the Moorish Idols. They travel in pairs (d’awww) and have ornate fins and thick black, white, and yellow stripes. Give ’em a Google. The highlight of our day was seeing two groups of sea turtles – so beautiful, and within free diving range – no tanks required.

Those (fakakata) horse carts. Yes, that was my Yiddish for the day. Upon arriving in Gili T., we quickly noticed that there were no cars. Plenty of bicycles for the tourists (not that you really need them – the island is quite small), and scooters for the locals, but no cars or trucks. There were plenty of horse-pulled carts taking people and luggage from the harbor to their hotels, and hauling building supplies and food all over the island as well. While I’m not really thrilled with animal labor, I recognize its value in less economically stable areas of the world. Unfortunately, these horse carts are just inhumane. 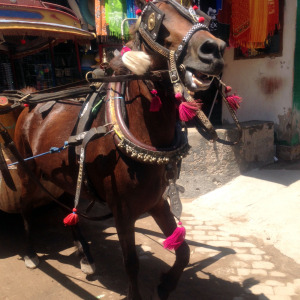 Can you see the foam in this horses mouth? They were all like that. All of them had ill-fitting and improper tackle – especially the bits. When fitting a horse for a bit, you usually want the lips to crinkle just slightly at the corners. These horses had bits that stretched their mouths wide open, causing them to pant and foam. Despite the heat, I didn’t see a single horse get a single drop of water the whole time I was there. Some of them had harnesses that rubbed their skin raw – it was heartbreaking. I found a pamphlet that encouraged tourists to only support cart-owners that looked like they had healthy horses, but I’ve found that many people didn’t even seem fazed. Gently put, sometimes I am disappointed by people’s lack of concern for other beings.

The mutant cats. Okay. I realize this sounds horrible, but it’s actually quite cute. Most of the cats on Gili Trawangan have slightly deformed tails from birth. Apparently it is a genetic mutation that has spread throughout the generations of homeless cats. Every cat I encountered had a very sweet disposition. They mostly want a few scratches on the chin, and a bite of whatever you’re eating – even if it’s a plate of noodles. 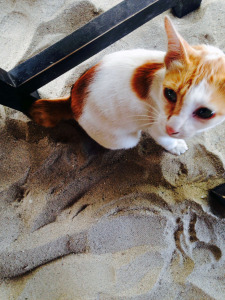 Can you see this kitty’s stubby little tail? Some of them just have crooked tails, while most of the cats have these little stubby, bent ones. It’s like a tiny, fuzzy butt hook. A FUZZY BUTT HOOK, I TELL YOU! 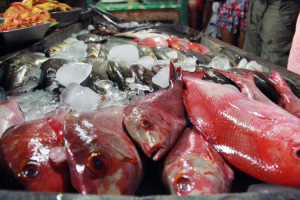 1. Whole grilled fish. DAMN was it delicious. There are many types of fish to choose from, including massive prawns and barracuda (which we don’t really eat in the states, but is not entirely unpleasant). Here’s the second half of our shared Snapper: 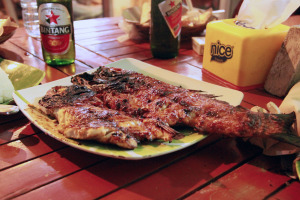 2. Satay. These meat and fish skewers were rubber with chile and butter, and grilled. What can I say? Simple and delicious. These skewers were “a bit pricey” at around $5 USD for three of them. 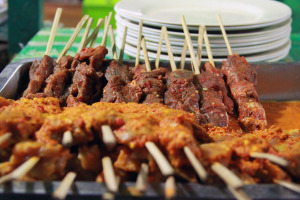 3. All of this other stuff: 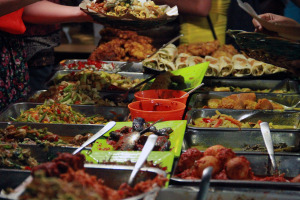 There were vegetable spring rolls, curry vegetable pancakes, and many salads to choose from. There are a ton of vegetarian options in Indonesia, as tofu and tempe are huge here. One of my favorite dishes is called Sayur Urab, which is mixed veggies (usually some types of beans and sprouts) with shredded coconut and spices. Also popular at the night market is Nasi Goreng, a spicy friend rice dish with veggies and a fried egg, and Mie Goreng, which is the same, but with noodles substituted for the rice. If you’re feeling extra peckish, you can ask for Nasi Goreng Campur, and they will add some shredded fresh chicken. Yum! Balinese cuisine also has lots of curry – one of my favorites. We paid $3000 Indonesian Rupiah (IDR) for plates piles high with veggies and meats, which comes out to about $2.75 USD. I certainly wont starve here.

The sunsets. Okay, Okay. I know it’s totally stereotypical to be on an island and gush about the sunsets, so I’ll keep it short. The Northern tip of the island is where you can catch the best sunsets. It’s easiest to bike out there since it’s a little farther away from the town center. There are plenty of beach bars on the way touting sunset happy hour prices if you get tuckered out halfway there. At the very end of the road, there is a swing set built right into the ocean (pictured up top and below). The first time I went, I got some really great pictures. The second time, I took some people new to the island so they could get their pictures and experience the pristine sunset over the ocean, and the hotel across the way had already put up a sign on top with their name on it. Advertising in such a beautiful space is a shame, but I guess that’s the way it goes. Of course, I couldn’t just sit on the swing like a normal person, and I decided to circus the shit out of it. Very much missing my aerial classes. Obviously. Shoutout to Lorelei because it’s her birthday (when I’m writing this, it probably wont be upon publishing) and she is awesome. This photo was taken before I was ready, I swear to you I squared my hips off after! 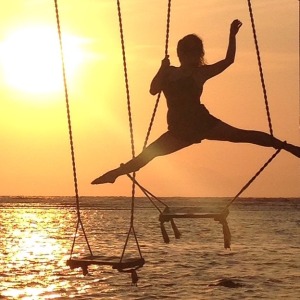 The party. Gili T. is quite the party island. There’s usually a coordinated bar crawl at nights with cheap cocktails and a fun crowd. Since methanol poisoning is kind of big over here, most people stick to Bintang (the favorite beer of Bali) or imported spirits. Better to be safe. I didn’t go out every night, but I did go a few nights, mostly just to come home early. The crowd was a little young and rowdy for me, but I still had fun because all of my amazing new friends were there. Party people, this is your place!

At any rate, my time in the Gilis has come to a close, and I have caught a fast boat to Amed, which is on the North side of the island. I am catching up with some friends here before traveling to Ubud. I will post Amed updates soon, in the meantime, enjoy the wake of the fast boat with Lombok Island in the background. 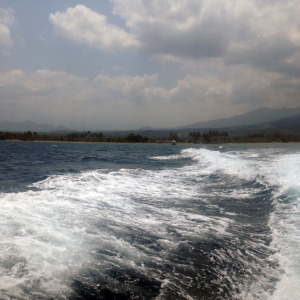