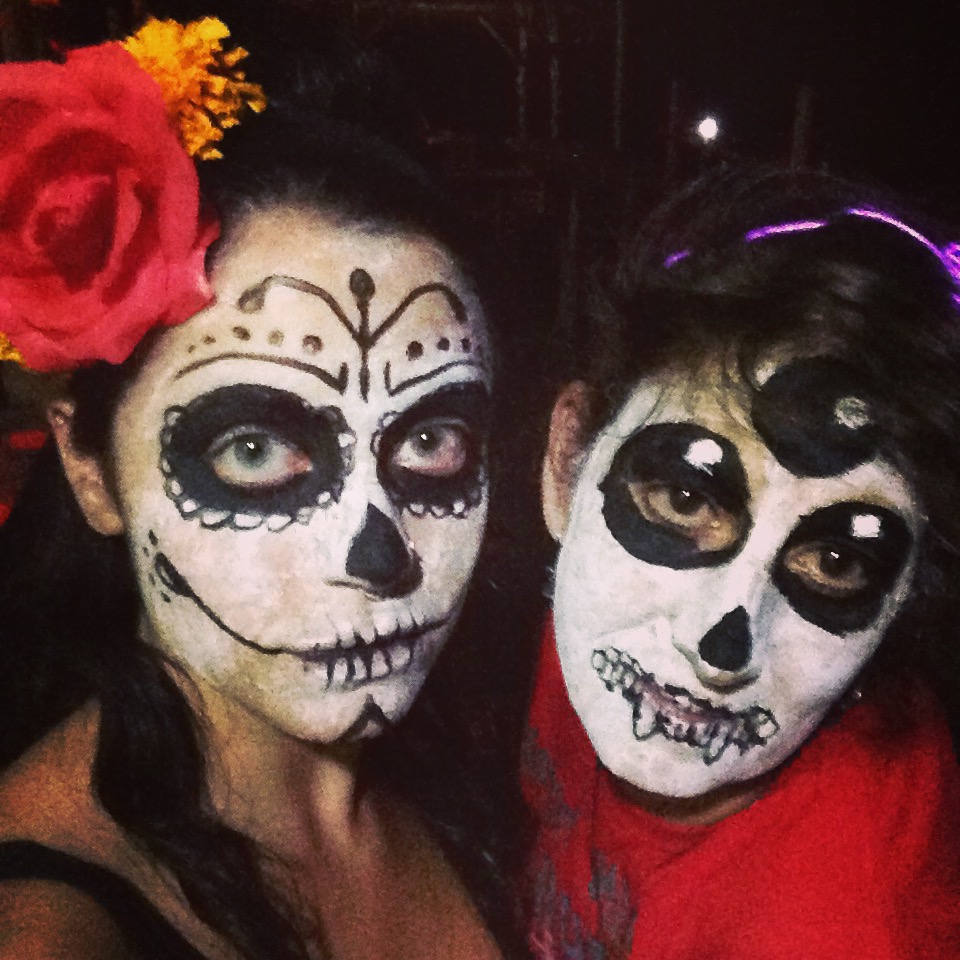 I’m in Ubud now, but gotta catch up and write about my time in Amed!

I got to spend nearly a week in Amed, which is on the northern coast of Bali. I took a “fast” boat from Gili Trawangan – I can’t possibly imagine what the slow boat would have been like. Perhaps a bamboo raft with no paddles whatsoever.

Picture me, a perpetually seasick puppy, on a boat whose engine keeps giving out. They stop to add oil, our tiny boat pitching up and down in the water. They stop to add fuel. They keep the boat fuel in two litre soda bottles. Do you know how much fuel a boat needs? It needs lot. So we pitch up and down while the deck hands use a thimble to fill up a swimming pool, except the pool water is gasoline and the fumes fill the cabin. I’m pretty sure I’m down a few brain cells. Was definitely down some breakfast.

Anyway, I made it safely to Amed, where Deena and Ivan, some of my sweet Burner friends had a driver waiting for me. The driver, Wayan, took me to their homestay and from there everything was calm and perfect for a while.

Did I mention yet that everyone in Bali is named Wayan? No, seriously. The Balinese have a very strict naming system. Not all of Indonesia, just Bali. The first born child in any family is named Wayan, the second is Made (pronounced MAH-day), the third is Nyoman, and the fourth is Ketut. There are a few (maybe one or two) variations based on geography and sometimes caste system, but that is mostly how it goes. Financially, it’s not opportune for Balinese families to have more than four children, but if it happens, the fifth child is named Wayan Balik, or “Wayan Again”. It’s kind of like the 90s when suddenly everyone was named Jennifer.

The first night I was there the hotel didn’t have a room for me, so Deena and Ivan let me sleep on their patio – the temperature was perfect for sleeping with the cool ocean breeze, and I could actually see every (and I mean EVERY) star in the sky. 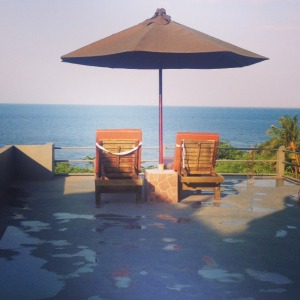 That’s the daytime view of my patio (their room eventually became my room), and here’s the view at sunrise: 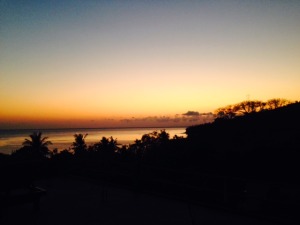 BOOM. Isn’t that beautiful? I couldn’t recommend the sweet little hotel more highly. I woke up at 5AM every morning I was there for my yoga self-practice just to catch this view. I’ve never been so grateful to just be exactly where I was.

There’s not a ton to do in Amed – it’s really a sleepy little town. The black sand beaches are pretty, but not so much for laying out. That black sand gets HOT! Luckily for us, the best part of Amed is not on the sand, it’s in the water. We snorkeled quite a few times during the week because the reef was just that beautiful. First of all, the reef was so close to the surface, we could free dive to just about everything – to tanks required. Secondly, the reef was completely pristine and totally intact. Never in my life have a ever seen such perfect and abundant coral. Third, there were fish EVERYWHERE. Not just a cool fish here and there – I’m talking about everywhere – surrounding us at all times. We saw some cool things I’ve never seen before like a purple-spotted ray and a banded sea snake!

The place we stayed at had some of the best traditional Balinese food in Amed. We had omelets and banana pancakes in the morning (an asian pancake is kind of more of a crepe consistency, none of those fluffy Bisquick quys), and beautiful curries and veggie dishes for dinner. Everything we had was fantastic. They had beautiful Balinese coffee for us in the morning, and refreshing watermelon juice for us in the afternoon. We ate mostly vegetarian, but sometimes there was fish available, which was also delicious. Needless to say, the food safety regulations are not quite what they are in the USA. Our dinner on our last night was parked next to our scooters for a few hours: 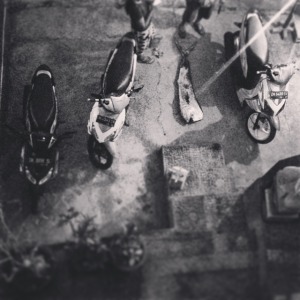 Head-in parking only, amiright?! It didn’t make us sick. We were just fine. As we all know, the US is only very strict because everyone is overly litigious, but still I’d like to think I am building my immune system here.

My last night in Amed just happened to be Halloween. If you know me you know it’s my FAVORITE holiday, and I wouldn’t miss it for anything. Deena and Ivan got in touch with one of their ex-pat friends who helped us to organize a little Halloween party at a nearby reggae bar. Here’s Deena and I in full garb: 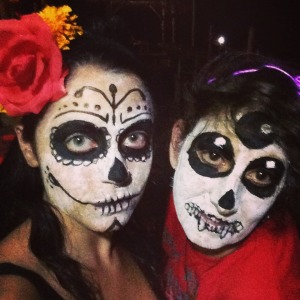 Of course we had a total blast. I’m not much of a drinker (okay, except red wine, you got me), but I had to try the Arak – a locally made spirit. Arak is colorless, unsweetened, and it frankly tastes like crap. It mixes pretty well, though, and it’s cheap! You can buy a 24oz bag (yes, it comes in a bag you can tear with your teeth) for about $1. Harumph. Anyway, I had ONE Arak/Pineapple cocktail and it just about knocked my socks off. Those Balinese can DRINK. Woof!

After my week with D&I was over, I got a ride into Ubud, the center of the arts in Bali. More on that later. I was so grateful to have been able to see them and spend time with them on this trip. Their generosity and intelligence are overwhelming in the best of ways – true and immediate friends. If you want to follow Deena and Ivan’s travels, take a peek at their super-awesome, and beautifully written travel blog, Take a Bow!

Love you all so much!