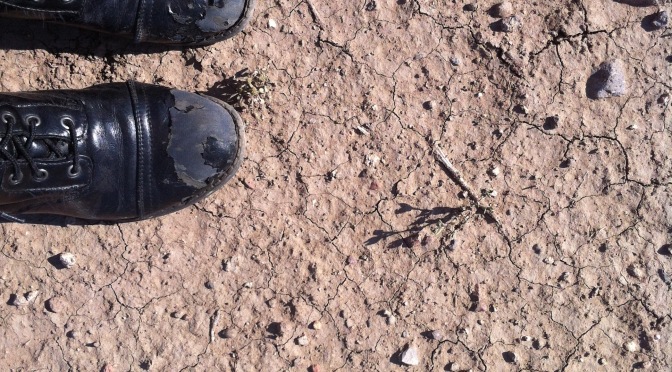 Well, Marfa got better by the minute. They only have one proper nice restaurant in town and it’s called Cochineal. The chef has been lauded for his food preparation and his rotating seasonal menu. I went as early as I could (I like to read and take my time at dinner so I go as early as possible so I’m not jamming up rush hour tables). I’m sorry to say the meal I had wasn’t the best. Looking back on past menus they’ve had, I think another day would have been better. I just wasn’t thrilled with the options. The food was pretty good, but I think I expected it to floor me like everything else in Marfa. C’est la vie!

After dinner I hopped in the car and headed East for about ten miles. Many years ago (1833, I believe), a resident of Marfa saw odd floating lights in the distance at night. He believed them to be the campfires of Apache Indians. The Apache Indians (camped nowhere near these lights at all), believed the lights to be something else entirely. Many years later, after many folklore stories had been passed along, they were dubbed the “Marfa Mystery Lights” and a viewing platform was erected ten miles east of the town. Pretty recently a nearby university called “bullshit” on the whole thing. Students and teachers came out into the fields with measuring equipment, telescopes, etc. Well, by the end of their trip they had all seen the lights and had absolutely zero clue what they were. Pooh, pooh on science.

I am an incredibly skeptical being and yet, a hopeful one. Lots of visitors complain about taking the trek to Marfa and not being able to see the lights. With one eyebrow arched (a metaphorical eyebrow… I can’t do that in real life), I headed out to the viewing platform. I almost didn’t go because it all sounded so hokey, but I have never regretted doing anything in my life, only not doing something! Anyway, I get out there in my car packed with stuff, and what do you know- a gaggle of people my age are hanging around waiting for the lights. Zane, the clear ringleader of the bunch was crooning an old country song while playing his guitar. I quickly offered up that I had a ukulele with me, and everyone seemed excited about that. After about an hour of talking, howling and playing our hearts out, we nearly all fell off the ledge of the platform at the same time- there, in the distance, were a bunch of zooming, blinking, multi-colored lights. What?!? We couldn’t believe our eyes. We turns jumping up and down, screaming expletives and trying to take pictures- was it car headlights?! Impossible, the terrain is flat (we had noted this before sunset)! They went on for over an hour. What on earth were they?? No one has a clue. But I am proud to say I’ve seen the elusive Marfa Mystery Lights.

I drove back to my sweet little tent, and there I stayed. I cozied into bed and read for an hour, which led to some of the most restful sleep I’ve had in a while. There’s something about the sounds of nature… 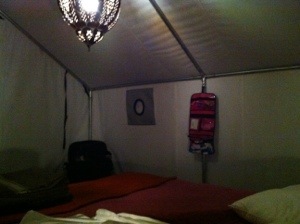 I woke up this morning, feeling refreshed, still high on the experience of the night. I packed up my tent, quickly, though. I had things to do! It’s hard to do anything quickly in Texas though- the heat is brutal. Even the ground can’t do its job of staying together underneath us, look at it cracking in the heat… 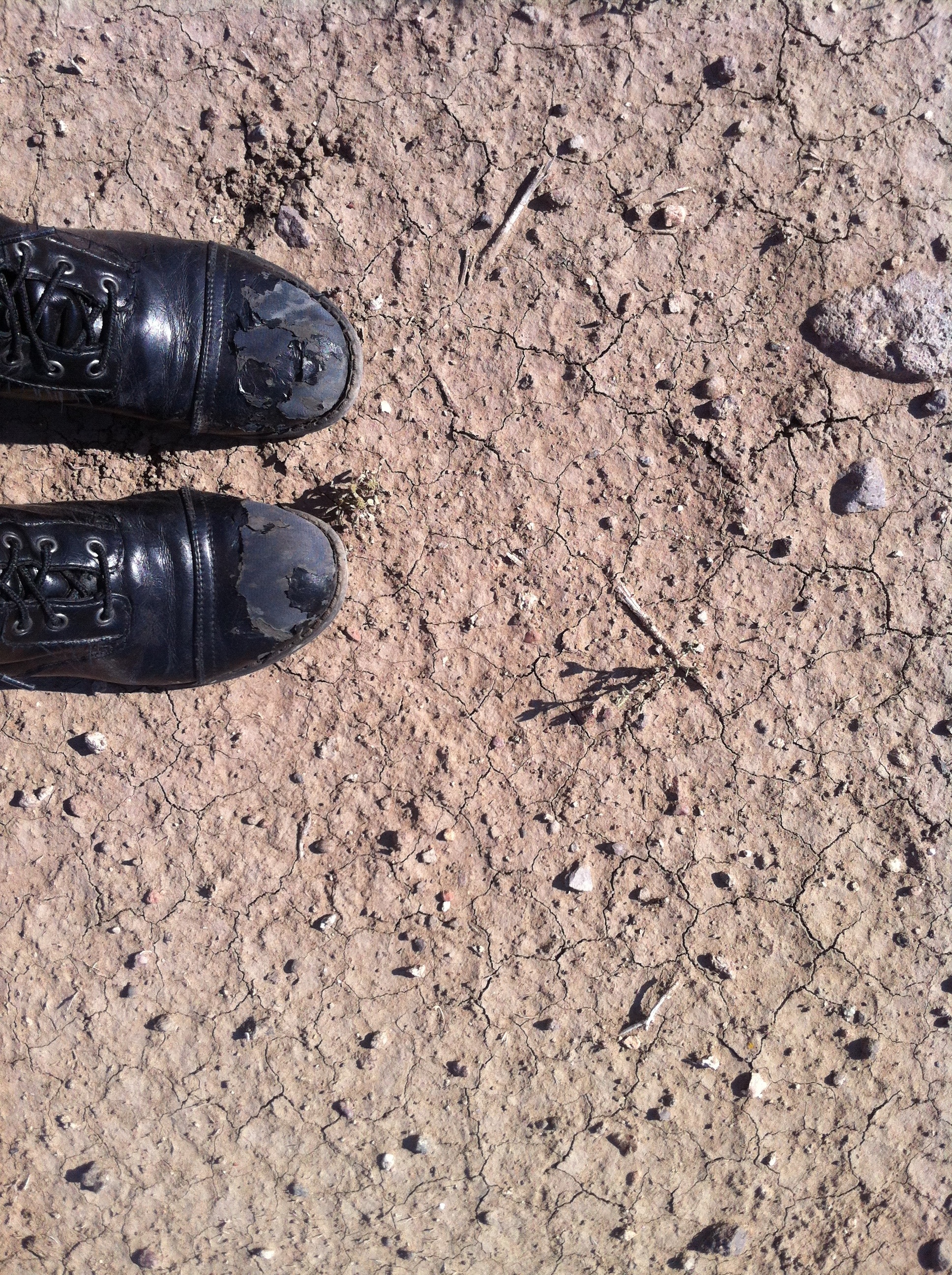 I mentioned Donald Judd yesterday and his transformative works of minimalist art- today I got to see them. Well, some of them. I saw the outdoor poured concrete blocks- there were fifteen groupings of them in all. It was a mile walk around to view them all. When I trudged over the grassy hill and first caught sight of them all together, I cried. I have always loved Judd’s work, and I guess I was overwhelmed by standing in the middle of it all. It made me feel so tiny. The boxes look lonely and desolate, but playful at the same time. I’m not sure how. Here’s a quick peek: 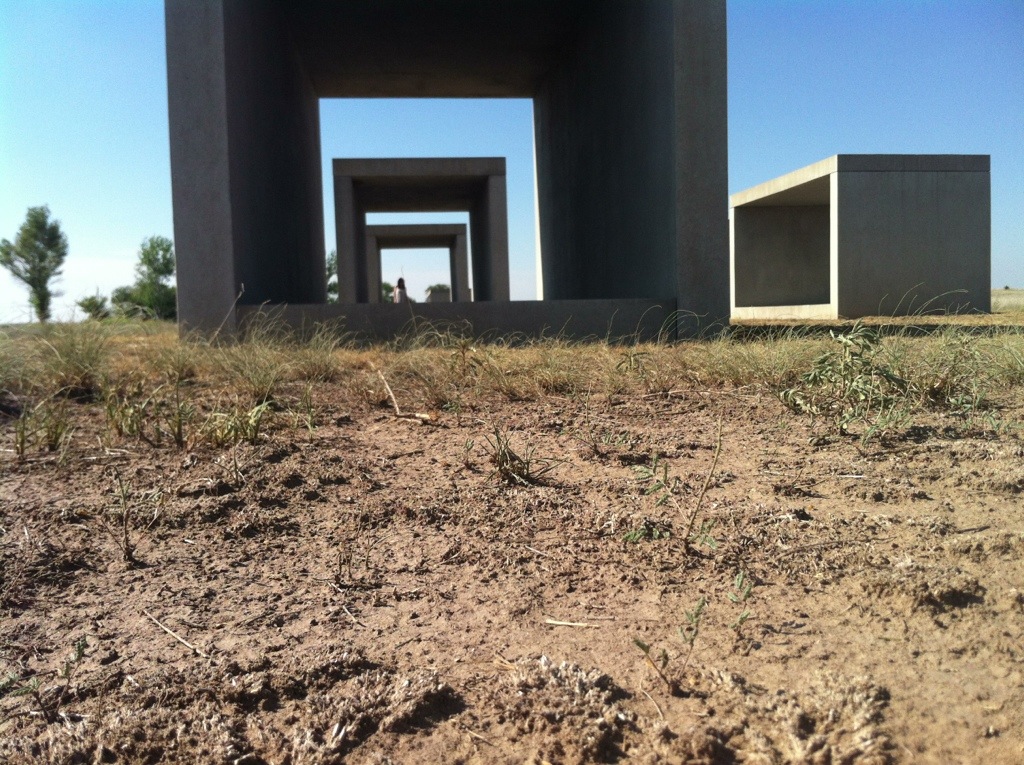 While I was out there, a group (flock, pride, gaggle??) of deer ran through the field, through the exhibit. It was so wild to see them all running. There looked to be about 5 or 6 elders and 10 babies. There was one male who seemed particularly protective, stepping between me and the rest of the herd, allowing them all to pass by.

Before I left the boxes, I sat and meditated (yes, meditated. Are you proud, dad?!) for what felt like 5 minutes but I think was more like 30. I had a lot to (not) think about!

I was about to head out of town, but I stopped at Future Shark, another local favorite, for lunch. THIS was the meal I had been looking for!! Even though it was totally casual (it had no air of pretension), it was perfect. My meal was fantastic. They even had this nifty squirrel wallpaper in the bathroom: 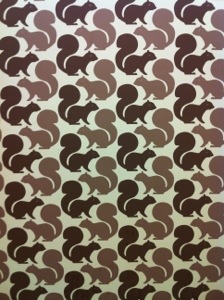 Because my girlfriend isn’t reading this blog, I can say with confidence that I will one day have this squirrel wallpaper in my bathroom. Sorry, hunnie.

It was bittersweet leaving Marfa, but I had to press on. Today’s drive was brutal. Cell service was limited, so I couldn’t make that many calls, and satellite radio was limited, so I was mostly stuck with my thoughts. I listened to about two hours of a book on tape, but the monotonous tone of the reader’s voice almost caused me fall asleep! I didn’t even think about that…

I landed in San Antonio just in time for dinner. Lucky me I talked to Grandma B earlier in the day and knew just where to do! San Antonio has a gorgeous River Walk with restaurants and shops, check it out: 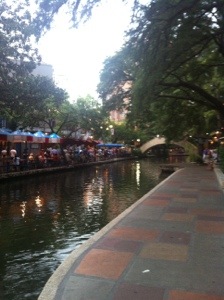 I’m sitting in a restaurant right now, and I just had some of the BEST ceviche I’ve ever had, made with Texas redfish! DELICIOUS and beautiful. I’m gonna go finish it, and I’ll check in tomorrow, okay? Love you all! 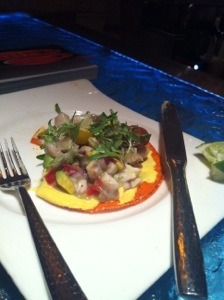